History of the Practice

The practice at 163 Dunstable Road became a group practice in 1906/07 when Dr Oliver Smithson was joined by Dr Robert Daniels Bell – a then junior doctor who had previously graduated in classics from Glasgow.

Soon after the inception of this group practice, Dr Smithson emigrated to Australia to work at the O.K. Mines. Dr Bell’s involvement with the Luton Union House, the Bute Hospital, the Children’s Hospital and various Provident insurers gained him great respect and a good name during the pre-war years. Dr Bell enlisted in the RAMC during World War 1 and was gassed at the trenches in 1917 with mustard gas. He was named in dispatches and was decorated at Buckingham Palace after the war. Cited in the London Gazette, he was awarded the Military Cross for gallantry and distinguished service in the field in March 1918.

When he died in the 1930’s he left behind a solid practice with three other equally distinguished physician/surgeons including Dr Hugo Melville and Dr Eberlie, many of whom the elders amongst you will have met. It is in honour of Dr Bell that we decided to rename the practice in 2002.

On his death, the practice was then based at Liverpool Road and soon after moved to a site next to the old St Mary’s Hospital at the junction of Dallow Road and St Mary’s Hospital. Thereafter, in the late 1930s, a purpose-built surgery was constructed at 163 Dunstable Road, which was a very early prototype of its kind, long before the inception of the National Health Service in 1945/46. It was a visionary move which meant colossal growth during the 1930s, 1940s and 1950s of the practice at 163 Dunstable Road, and at one point about a quarter of all the residents of the borough of Luton were registered on its books. We have been based in this building ever since.

During the 1940s none of the doctors at this practice were called up for service and during the Second World War a solitary bomber did manage to inflict a minimal amount of damage to the surgery by cracking one of its tiles. Bearing in mind that hits were received in Dallow Road, Kenilworth Road, Old Bedford Road and in the immediate vicinity, the practice did exceptionally well by only making one small claim on the insurance.

Increasing technology and medical know-how, and changes in the geography of the town since the war, and especially since the 1960s, has resulted in a fall in the number of patients registered at 163 Dunstable Road. The number of doctors too has been reduced. A branch surgery was opened at Barton Hills with the new housing development in that area in the 1980s, and three doctors sent there to serve that population. That surgery no longer has links with the surgery at 163 Dunstable Road and they are now a reputable medical practice in their own right.

This practice is one of the oldest in town, with a long-standing reputation which, with your help, we shall continue to maintain for at least another 100 years. 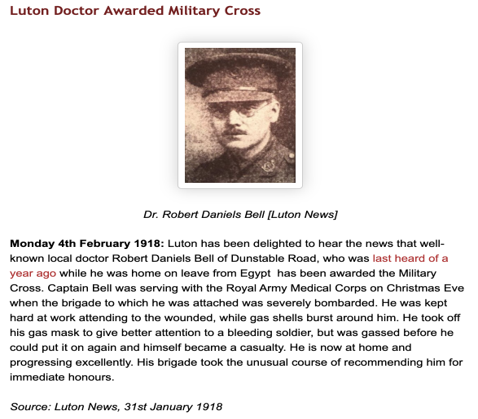